When it was first invented, in 1965, the designer of the Tone Bender could never have possibly imagined how successful the model would become. Tone Benders started out as a product that might nowadays be referred to as ‘boutique’, and they were initially built & sold in only relatively small numbers, directly by Gary Hurst. By the late 1960s, however, the Tone Bender’s cosmetic & electronic design had been reworked several times to reflect the fact that the model was then being mass-produced in the UK and in Italy. Over the course of just a few years, what was originally an expensive and exclusive item had become an international household name among guitarists.

Sola Sound (and Vox, via EME/JEN) never settled on a definitive Tone Bender design before the model was finally discontinued in the late 1970s/early 1980s — circuits, graphics, enclosures & construction styles gradually evolved over time. This has resulted in an abundance of fuzz boxes that, despite having very similar aesthetics & branding, came in very different historical contexts (i.e. different designers, manufacturers, parts of the world in which they were sold, and famous users). Different versions of the Tone Bender pedals sometimes even produce very different sounds & effects.

This page aims to compare & contrast a selection of specific versions of the Tone Bender that frequently get mixed up by players, collectors, and fellow researchers alike.

This page also explores some of the vague claims made in various articles & literature over the years, relating to the Tone Benders used by specific guitarists, in order to clarify exactly what sort of version Tone Bender was actually used.

Interact with the images below to find out a brief summary of each model, and to learn about how to tell the different models apart. 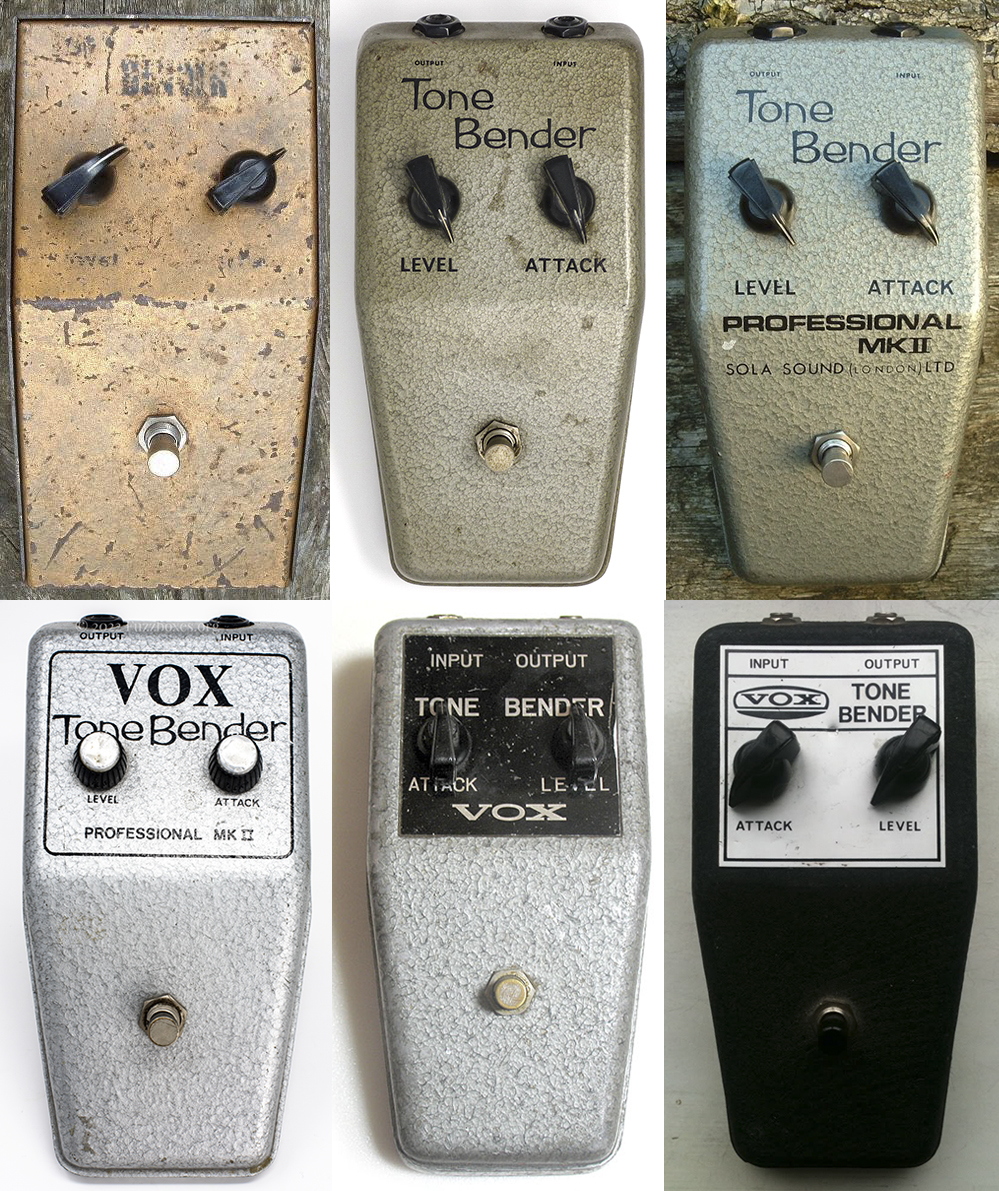 Developed during 1964, and offered for sale by April 1965, this was one of the very first commercial fuzz boxes in the UK. The earliest MKI’s were built & sold predominantly to professional guitarists, but it wasn’t long before the model became marketed & sold by Macari’s Musical Exchange, under their ‘Sola Sound’ brand.

Developed at some point in around late 1965 to early 1966, Sola Sound’s Tone Bender ‘MK1.5’ was a successor to the Tone Bender MKI.  The unusual model designation, ‘MK1.5’, has been retrospectively attributed to this Tone Bender, in lieu of any formal branding on the enclosures of the pedals. The ‘MK1.5’ moniker refers specifically to this Sola Sound product, which was later redeveloped into the more well-known Tone Bender Professional MKII. The Tone Bender ‘MK1.5’ was copied by Arbiter (for their Fuzz Face), as well as by EME/Jen, for the Italian-built ‘Vox Tone Bender’ (model v828).

Sola Sound’s Tone Bender Professional MKII was an improvement upon the two-transistor Tone Bender ‘MK1.5’. It was developed in 1966, and unlike the ‘MK1.5’, the Sola Sound MKII was marketed by Macari’s Musical Exchange as a ‘Sola Sound’ product. Sola Sound also branded the same product for Vox, but this Sola Sound-branded model generally predates the Vox-branded versions (although there are one or two anomalies to this trend).

Built by Sola Sound between 1967-1968, but branded & marketed as a ‘Vox’ product. These Tone Benders were built in Britain, and were apparently intended for the British & European markets. The Vox-branded Tone Bender MKII was more or less the same as the Tone Bender MKII branded under Sola Sound’s own name.

Some of the very earliest Vox-branded Tone Bender MKII pedals featured identical silk screened graphics to the Sola Sound Tone Bender Professional MKII, except that Sola Sound’s brand name had been crudely covered up, and replaced with Vox’s.

The black Vox Tone Bender (model v828) was a successor to the grey Vox Tone Bender (built c. 1966-1968), and was also manufactured in Italy during the period from around 1968 until the early 1970s. It was sold predominantly to the American market, via Thomas Organ, but examples of this black Tone Bender surface in central Europe frequently enough to suggest that they may have been sold there too.

Mick Ronson developed a signature glam rock guitar sound using a combination of a Gibson Les Paul Custom, a Marshall “200” amplifier, wah-wah, as well as a Tone Bender pedal. Because of how similar the aesthetics & branding of early Tone Benders are, the exact version of Mick’s Tone Bender has been mixed up over the years, including by Mick himself.

Descriptions of Mick Ronson’s famous Tone Bender, offered in recent publications, name it as a ‘Vox’ Tone Bender.1 This suggests that Mick’s pedal might have been either a British-built Sola Sound Tone Bender, rebranded for Vox; or perhaps the Vox Tone Bender, model v828, manufactured in Italy for Thomas Organ.

To add to the confusion, when Mick Ronson outlined his equipment in a 1973 press interview, he described his fuzz box (famously having originally belonged to Pete Townshend) as being an “American” Tone Bender.2 Tone Bender pedals (branded for ‘Vox’, or otherwise) were, however, never actually manufactured in the United States.

Fortunately, there are numerous photographs of Mick performing with the Spiders from Mars (as well as with the Rats, prior to his work with David Bowie), with a visible fuzz box on stage. For Mick’s fuzz box to be a Vox-branded Tone Bender (either the Sola Sound version, made in Britain; or the EME/JEN version, made in Italy), one would expect to see the rounded edges of the enclosures of the pedals in these photographs.

The above photo is among the clearest of shots of Mick Ronson’s Tone Bender, and the hard edges of its casing reveal it to be unlike any known ‘Vox’ branded Tone Benders. Instead of the cast aluminium enclosure, Mick’s pedal is made of folded steel, and if the photo were in colour, this pedal would almost certainly appear to be painted in gold & black, rather than the silver or grey of the Vox-branded Tone Benders. (Photo credit unknown)

Mick’s Tone Bender was neither an American product, nor one that was made by Vox — it was a Gary Hurst/Sola Sound Tone Bender ‘MKI’.

That isn’t to say that Mick never used fuzz boxes other than the famous Tone Bender ‘MKI’, but there isn’t any known evidence — in the form or photos or testimony — that lend weight to the Vox Tone Bender claim. A new discovery in 2017 revealed that Mick briefly also used a Tone Bender ‘MK1.5’ fuzz box, but this predated Mick’s work with Bowie & the Spiders from Mars.3

Syd Barrett & Pink Floyd at Games for May

There have been (thus far, unsubstantiated) rumours of Barrett using a Selmer Buzz Tone, and it was also reported in the press that his fuzz box was some sort of ambiguous “home-made” device.4 The only type of pedal that Barrett is known to have been photographed using, however, was a Tone Bender of some sort.

Pink Floyd were photographed numerous times during a rehearsal for the now-famous ‘Games for May’ concert, which took place on the 12th of May 1967, at the Queen Elizabeth Hall in London. This above picture — where Syd Barrett can be seen with an (unplugged) Tone Bender-shaped fuzz box on stage — has prompted the history books to credit him with being a user of the “Vox Tone Bender”.5

If we inspect the visible details of the pedal in the Pink Floyd photograph, and apply the information & logic from this page, we can make a good estimation of the exact version of the 1965-1967 Tone Bender that Syd’s might have been.

For this pedal to have been used by a British group, on a British concert stage, it is very unlikely to have been one of the Italian-built Vox ‘model v828’ Tone Bender pedals, because those pedals were manufactured for the American market. The Italian-built Tone Benders also came equipped with metal jack sockets, whereas the pedal at ‘Games for May’ has visible plastic nuts on its sockets instead, which strongly indicates it to have been a British-built Sola Sound model, rather than a Vox product. The ‘chicken head’ type knobs on Syd’s pedal also significantly minimises the possibility of it being one of Sola Sound’s Vox-branded Tone Benders.

All of the evidence suggests that Syd Barrett’s famous “Vox Tone Bender” was, in actuality, a Sola Sound Tone Bender [‘MK1.5’ or Professional MKII].

Up until here, this page has concentrated on correlating the cosmetic features of two-knob Tone Benders with the various different electronic circuits inside. This article should not, however, be taken as a rigid set of rules, but rather as a sort of guideline that informs our analysis of specific pedals that are unearthed (in garages, attics, or the used market, etc). An understanding of the different circuits & contexts of these various Tone Benders is also intrinsic to the analysis of the photographs of pedals online & those seen on stage.

What makes examining the many different versions of the Tone Bender fuzz box difficult, is also what makes it fun. While the correlations between circuits & aesthetics are very strong, there are still a small handful of instances where the circuitry inside a Tone Bender doesn’t match the casing that it’s been built into. Pictured below is an example of a Sola Sound Tone Bender MKII, which we would typically expect to see fitted with a three-transistor circuit, but for unknown reasons has come with the earlier two-transistor ‘MK1.5’ circuit instead. (Photo credit: H. Barclay)

These anomalies are exceedingly rare, but the reason why I am ending on this note is that there is simply no way to be absolutely certain about the circuit design of a Tone Bender by relying solely on its cosmetic features. An inspection of the circuitry inside is always necessary in order to identify the exact version of the Tone Bender in question.

Feel free to get in touch with me, via the contact form, with any queries about identifying Tone Benders.

Thanks to David Main & Humphrey Barclay for the kind permission to use several of their photos.