The Shatterbox was an early ‘multi-effects’ fuzz box that combined the Hornby Skewes Treble Booster with the Zonk II. Featuring two foot switches, the Shatterbox offered users a choice of either the boost or fuzz effects, or a combination of both.

With the same construction style as the Wilsic Sound Fuzz, and because late-production Shatterboxes featured the same type of knobs (and also because Wilsic Sound was already supplying Hornby Skewes with Miles Platting amplifiers during the 1970s), it is likely that Charlie Ramskir was involved with the development of this fuzz box too. For more information about Ramskir’s relationship with Hornby Skewes, including the common misunderstanding about Charlie Ramskir’s premature death, please see the page for the Zonk Machine.

This advertisement below has no official date printed on it, and an owner’s hand-written estimate of the year of publication, being 1967, is somewhat unreliable, because the earliest known surviving Shatterboxes all feature a selection of parts that is consistent with the products that Hornby Skewes was producing around the period of late-1968/early-1969.

The Shatterbox was supposedly shown “for the first time” at the Frankfurt Musikmesse trade fair in the spring of 1969.12 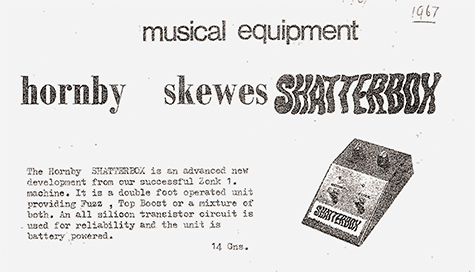 It is certainly possible that the Shatterbox was developed earlier than 1968/1969, but no such surviving example of a pedal is known to exist yet. Based on the date codes on the potentiometers of surviving Shatterboxes, we can ascertain that the model was still in production by the early-1970s.