These small, rectangular units were designed as attachments to an amplifier, rather than as stompboxes.

The Distortion Booster was originally designed in the UK, and the model was painted red. They were demonstrated in some form of another along with the other three models from the Vox ‘plug-in’ series (Treble, Bass and Mic Boosters), at the British Musical Instrument Industries Trade Fair in August of 1965,1 but there was reportedly a delay in production specific to the Distortion Booster,2 and so it’s unclear when the red model from the set actually made it to the market.

A little known fact about the British (red) version of the Vox Distortion Booster is that some of the earlier units featured a circuit based on Gibson’s Maestro Fuzz-Tone, but with only two germanium transistors, and running off a 9 volt battery (compared with 3 volts as in the Maestro model). Later examples of the red model featured a silicon-transistor ‘textbook’ circuit (similar to, but not directly related with the two-transistor Tone Benders and Fuzz Faces.)

Pictured is the set of four ‘plug-in’ Boosters, as they appeared in a JMI catalogue, in 1966. (Credit: Voxshowroom.com)

Brian May famously housed a Vox Distortion Booster inside his ‘Red Special’, and the photo of the surviving remains of his unit reveals it to be an earlier example, with the germanium-transistor circuit.

It’s possible that this was the circuit that was used for the fuzz guitar tracks on the 1984 and Smile recordings. (Photo credit: Kevin Nixon/Future Publishing)

By late-1965, Thomas Organ had already begun prototyping their own version of the unit for distribution in the United States,3 which was eventually housed in a very similar looking chromed casing. The known surviving Thomas Organ-built Vox Distortion Boosters feature the silicon-transistor circuit, built on perfboard. 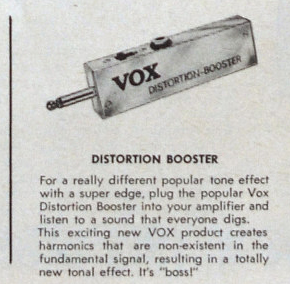 Thanks to J. Voggenthaler/Electric Warrior & the Vox AC100 website (https://www.voxac100.org.uk)