The Buzzaround was developed by Jim Burns’ guitar company in the mid-1960s, and manufactured in relatively small numbers over the course of several years. Burns’ Buzzaround was named in a Burns price list from April 1966, but even the earliest of the known extant pedals were built with potentiometers dating to September 1966, and there is no known picture, or even mention, of the model in the press until winter of 1966.

For the longest time, little was known about the origins of the Buzzaround circuit, other than unsubstantiated rumours about a connection with Gary Hurst. In 2021, it was discovered that the Buzzaround was an unauthorised copy of a much more obscure mid-1960s fuzzbox, called the G. P. Electronics Harmonic Generator.1

Sola Sound used a circuit for their Tone Bender MKIII that was very likely to have been based on the earlier Buzzaround design, but the Tone Bender MKIII was modified to include a tone control. At some point in the late 1960s, the Italian musical instrument company, Elka, released the Dizzy Tone fuzz pedal, which was also derivative of the Buzzaround.

Buzzarounds were housed in a folded steel enclosure and came painted in dark grey Hammerite. While it’s perhaps a little too unreliable and inconsistent to use on stage, the way the three controls interact make for a very flexible instrument that wouldn’t be too far out of place in a recording session for modern distorted guitars.

The units were fitted with a panel underneath denoting their serial numbers. The known range of serial numbers on surviving Buzzarounds spans from 6134 to 7993, but because identical panels have been found in Burns amplifiers, with similar serial numbers falling within that range, it is impossible to even estimate how many Buzzarounds might have originally been produced.

The date codes on the potentiometers of surviving examples of the Buzzaround reveal that the model was still being built by early 1969.

A “new” version of Burns’ fuzz box was briefly mentioned in the November 1966 issue of Beat Instrumental. 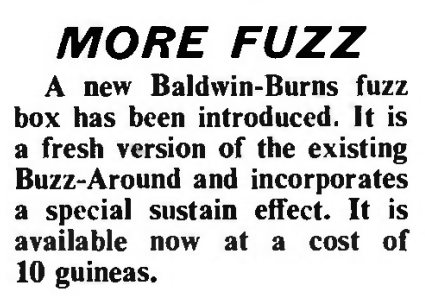 The language in the above text has led some people to believe that there exists a version of the Buzzaround with only two knobs (presumably missing the ‘sustain’ control). There is currently no such known surviving example of a ‘two-knob’ Buzzaround, and because the earlier G. P. Harmonic Generator also features three controls, it is unlikely that a more primitive version of the Buzzaround exists.

What is known, however, is that some of the earliest Buzzarounds were built with non-latching footswitches. This means that the user would have to keep their foot down on the pedal in order to ‘sustain’ the fuzz sound, and so it’s quite possible that the ‘fresh’ version of the Buzzaround was one fitted with a latching footswitch instead.

The front panel for the Buzzaround was designed by Eddie Cross, who was involved in the production of the pickguards on Burns guitars during the 1960s, and who preserved his original technical drawing of the Buzzaround’s control layout (pictured below).

The Buzzaround featured a circuit built on tag board, with three germanium NKT213 transistors.

An unusually high number of original Buzzarounds have surfaced in Australia, which suggests that Baldwin-Burns might have had distribution agreements in place to sell them over there, in addition to in the UK.

A discussion about the Buzzaround is incomplete without a mention of the band most famously connected with it: King Crimson. Robert Fripp confirms that it was the Buzzaround that he used on the earlier Giles, Giles & Fripp recordings.2 Fripp also refutes the allegation that the Buzzaround was used for his guitar parts on David Bowie’s ‘Heroes’,3 and photos of King Crimson suggest that Fripp had stopped using Buzzaround pedals by the early 1970s, using pedals like Guild’s Foxey Lady for his distorted sounds instead.

Thanks to B. Lovegrove & the Burns Guitars group on Facebook